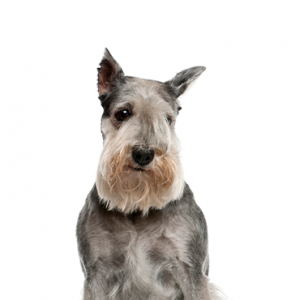 The one with all the ‘stache’, the Standard Schnauzers are quite distinct in their look from other dog breeds. They are a breed with roots traced back to Germany and have been around for quite some time. They were bred to hunt vermin and be guard dogs on German farms. They were quite the ‘all-purpose dog’.  They are robust, medium-sized with an aristocratic demeanor. They were popular subjects of famous painters, one of which was the famous Rembrandt. Discover more about our Standard Schnauzer puppies for sale below!

The Standard Schnauzer originated in Germany from within the fourteenth to the fifteenth century. It is a medium-sized dog of the Schnauzer breed type and the oldest, a breed type that has the giant and miniature variation. In the past, it used to be referred to as the Wire-Haired Pinscher before Schnauzer was adopted. The word Schnauzer is literally translated to “snouter” from the German word for “snout”. Colloquially, the word means “mustache”.

This name suited the Standard schnauzer because of its distinct beard. This dog of German roots was the result of crossing the gray Wolf Spitz with black German poodles. They first came on public display in 1879 at Hanover during the Third German International Show where they won the first prize. In 1880, a breed standard was written.

They have a history of service to humanity. They were employed in the first world war to carry dispatched and aid Red Cross workers to care for wounded soldiers. They were also recorded to have helped with police work in the German force. Records show that Standard Schnauzers arrived in the United States in the early 1900s. It is indicated that they arrive in the U.S. with immigrants and by American travelers who took an interest in the breed.

This breed has a natural instinct to protect. They are loyal dogs who will protect their families aggressively if they have to. They possess high intelligence and are sometimes set in their ways. They are inquisitive and creative to a high degree. Like most breeds, if trained and properly socialized at a young age, they are found to be patient and highly tolerant in any situation. Standard Schnauzers require an owner with a firm-hand and consistency to be well mannered. Spoil them and they become difficult to control. Owners have to be consistent with training and commands. They are territorial and watch owners closely on who to accept and who to bark at – they have a deep bark too!

The Schnauzer has high adaptability. They can live on farmland or fit right into a city apartment with ease provided they get regular exercise. They are high-energy dogs who require nothing short of an hour of strenuous activity a day. Owners can take them on walks three times a day, each lasting about 20-30 minutes.

Hand-stripping your Schnauzer is the best if you show them or want the feel of the proper coat. This should be done every four to six months. You can also take them to a groomer for coat-clipping but this will make the coat loses its proper feel and look and your Schnauzer will shed more. Brush your Schnauzer’s teeth ten to twelve times a month to remove tartar buildup and bacteria infestation.  It is better if you can clean their teeth daily. If Schnauzers start scratching the floor, it means it is time to trim their nails. Having their nails trimmed not only protects you from scratches but also helps to keep their feet in good condition. Take them for regular checkups at the vet. It is advisable to do this at an early age to get them accustomed to medical checkups.

The unregulated breeders who are selling outside of the USDA regulations and without a license are what we consider to be “Puppy Mills.” We are committed to offering Standard Schnauzer puppies who will grow up to become important members of your family. We only purchase puppies from the very best sources, and we stand behind every puppy we sell.

They are an all-purpose breed, therefore, they are both good watchdogs and equally good guard dogs. They are quick to alert homeowners to the presence of an approaching intruder and will attack any intruder which tries to gain forceful entry into your home.

They demonstrate above-average intelligence which makes them trainable albeit with a firm-hand because they are stubborn.

They are a healthy breed. However, the Standard Schnauzer Club of America recommends annual testing for their eyes.

The Standard Schnauzer has a life expectancy that lies between 13-16 years.

Standard Schnauzers if socialized properly in their puppy stage, will be great with kids in the home.

Confining your dog is the key to housebreaking it.

They are territorial and bark at strangers.

Standard Schnauzers like to swim. However, don’t force your Schnauzers to swim if they do not want to.