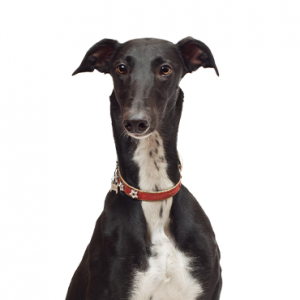 Greyhounds are a breed of dogs known mainly for their excellent speed and slender frame. These dogs can go as fast as 40 or 45 miles per hour and were originally used as race dogs because of their great speed. However, they are mainly used as pets and family dogs these days. Discover more about our Greyhound puppies for sale below!

Greyhounds are one of the oldest and earliest breeds of dogs known to man. They have been in existence since the time of the early man and were depicted in cave drawings.

They were also referred to in early Egyptian records and are the only dog breed mentioned in the Bible. Greyhounds had a special status in Britain and were very popular amongst commoners because of their ability to hunt hares and games.

They were also popular amongst nobles in order to keep up the status of nobility. In 1014, the existing Forest laws banned commoners from keeping this breed of dogs near the royal forests. As the years went on, Greyhounds began to be used for coursing and subsequently, for track racing.

Greyhounds are generally unaggressive and reserved. They prefer to lie indoors without disrupting the house. They equally prefer quiet environments and may not cope well in perpetually noisy conditions.

They love the comfort and can be found snuggling under the covers or lying on a couch.  Although Greyhounds are not typically aggressive towards other animals, they have a tendency for chasing smaller animals.

Greyhounds are very docile and eager to please. As such, they do not require a firm hand. As an owner, it is important to show them more love than scolding.

Greyhounds love to laze about and can be major couch potatoes. As such, they are very comfortable with living in an apartment as long as they have a cozy area to lie down and rest.

However, it is important to provide them with a large fenced area where they can run and gallop around. This is because of their natural love for running and chasing things.

However, the area has to be fenced. This is because Greyhounds are sharp-sighted and may sight a smaller animal in the distance. Their urge to chase it may take over and they could get lost during the chase. Thus, it is very important to fence their running area.

Greyhounds are often referred to as the cheetahs or Ferraris of the dog kingdom. They love to run and play games. They are very energetic and need a lot of activities.

As such, it is important to regularly exercise them for about 20-40 minutes each day.  This can be done by letting them run in a large fenced area or playing mini-games which involves running.

The typical Greyhound has a short coat that does not require much grooming. All it needs is a bath every week and a regular rubdown. They also need their teeth brushed in order to avoid dental problems.

It is highly advisable to regularly trim their nails because they are fast-growing and may hurt the dog if they grow too long. Owners should also consider cleaning out the wax in the ears of their Greyhound.

The unregulated breeders who are selling outside of the USDA regulations and without a license are what we consider to be “Puppy Mills.” We are committed to offering Greyhound puppies who will grow up to become important members of your family. We only purchase puppies from the very best sources, and we stand behind every puppy we sell.

Greyhounds are generally slender and elegant. However, in some cases, a lack of proper diet could cause them to become obese. Your Greyhound is obese if its abdomen is no longer concave as usual and if you cannot feel its ribs. A normal Greyhound should be slender with a visible waist.

This isn’t a problem. Greyhounds are very docile or unaggressive and may run and hide at the first sign of danger.

No. Greyhounds have the least tendency to bark except on special occasions.

Greyhounds do not shed excessively. As a matter of fact, they shed very lightly.

Greyhounds love to run and chase smaller animals. This urge is innate and cannot be curbed. You can fence their running area to make sure they do not run off and get lost.

Greyhounds are very gentle and need a soft hand in order not to instill fear in them. Although they may show signs of stubbornness, it is important to train them gently with love and affection.

With proper nutrition, a Greyhound could live for up to 10-14 years.

Greyhounds are not usually destructive. There are very few chances of your Greyhound deliberately destroying your household objects.

Greyhounds are a gentle, quiet breed of dogs that require enough love and affection. Owning a Greyhound demands that you give them sufficient freedom to run and play. With proper care and nutrition, you could enjoy long years with your Greyhound.